The Hash House Harriers (HHH or H3) are “a drinking group with a running problem.” Every Wednesday the Sihanoukville chapter (ShvH3) get together to walk a trail, drink beer and have a good time. Their group has one rule: every person that wants to join the walk – including the regular expat members of the group – has to donate at least 1 US dollar towards the ‘Shine Cambodia’ monthly donation.

ShvH3 and the children of Otres first became connected in 2015 when their then ‘GM’ and his partner decided to do some volunteer help around the school grounds (a project called Painting Smiles was there at this point). Over the time various donations were made from Hash funds and a personal relationship was made with Piseth – Shine’s Head Teacher. In 2016 the GM had to go back to Australia on short notice. “They needed to get rid of all their household stuff,” so donated a lot to Piseth and ‘Shine.’ Also in 2016 one of their key members unexpectedly passed. “His wife had the ordeal of packing the house and finding new homes for their household goods, clothing and school supplies and did not know what to do with it,” tells Jamie. Jamie reached out again to Piseth – Shine’s Head Teacher – who she met a few weeks earlier on Facebook. “We explained the situation and told him the charity could have everything. He was very happy with that of course. 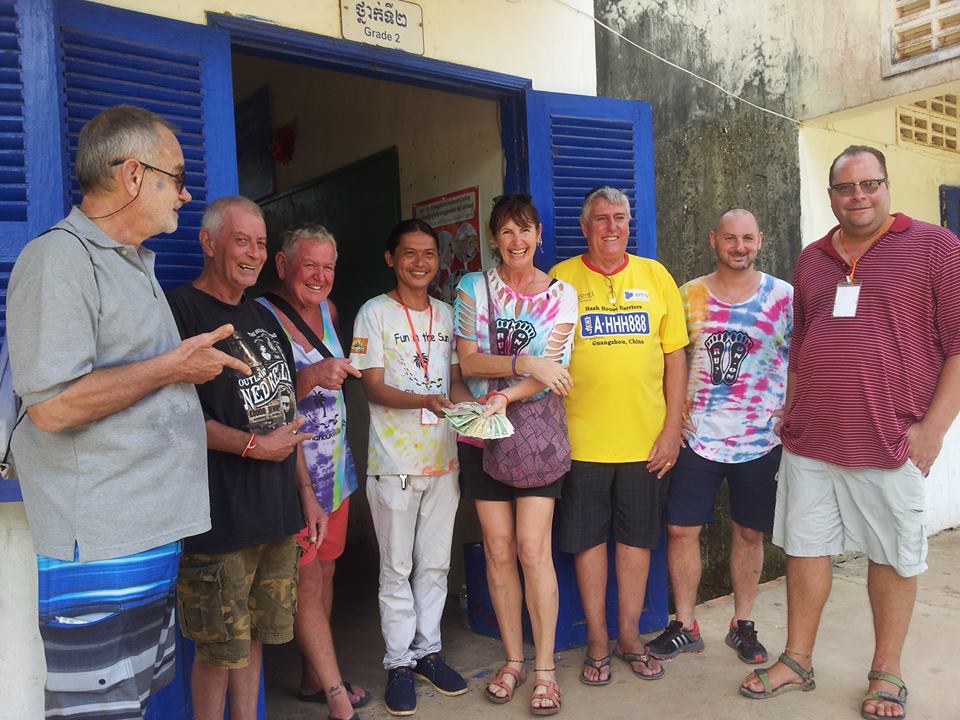 From that moment forward Jamie started thinking of ways to support ‘Shine’. She spoke with the ShvH3 members and asked if they would agree to start a fundraiser with a weekly US$1 donation. ShvH3 is able to support Shine every month because of the donations people make to join their walk. “We have H3 members from all over the world (worldwide there are about two thousand Hash groups.) who come to visit us and make a donation. Some of them donate 10 or even a 100 dollars, others bring items like schoolbooks and clothing.”

After a few months the word got out amongst H3 friends and visitors. All of a sudden the wheels were turning and things were happening at a crazy pace and we are not talking about just drinking here, but about the donations ShvH3 have made to Shine over the last few years. It is now not unusual for expat friends relocating to give their unwanted electrical goods, household items, groceries and clothing to the ShvH3 group to donate. “It’s just overwhelming how generous everyone is towards the kids and families at Shine. They know it’s more than just the education.” Jamie said. 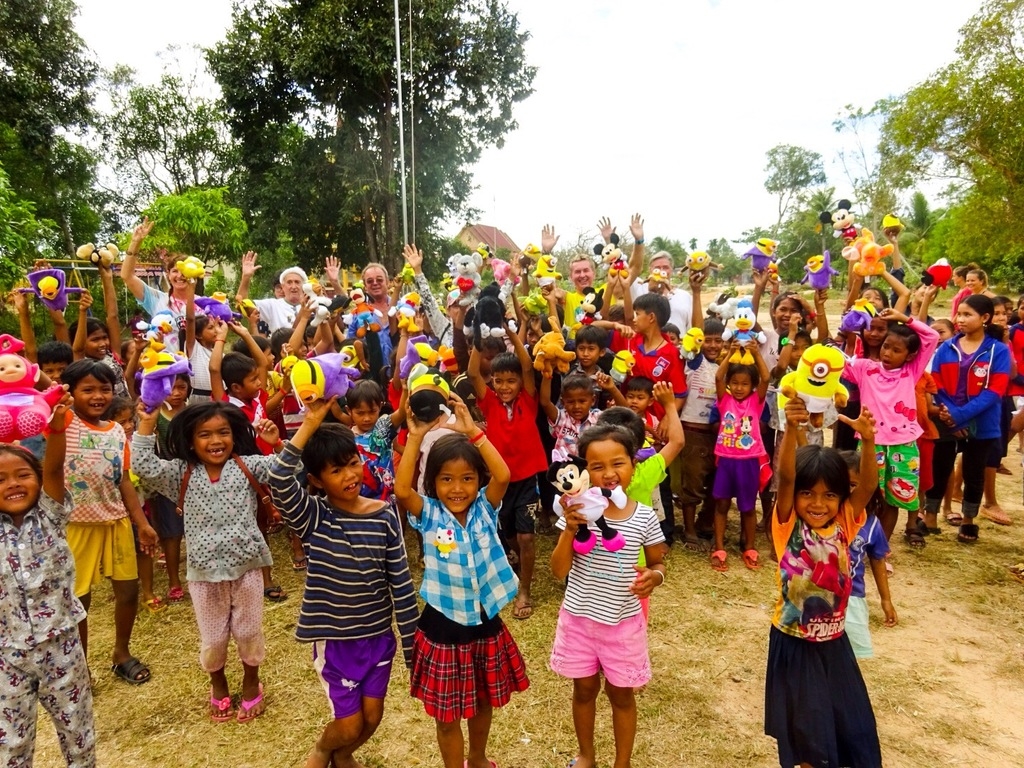 Sometimes bigger donations are made. The first one, five computers that are now used in Shine’s office and classrooms, swept headteacher Piseth off his feet. Jamie: “We did not tell him about it, we just turned up at the Shine grounds and said to him: ‘Wanna have a look in the back of the car?’ He was so happy.”

The Christmas fundraiser Pattaya H3 organised for Shine was another highlight. Over forty Hashers from different countries walked from the Golden Lion in Sihanoukville to Papa Pippo Restaurant in Otres 1. Together they raised 710 US dollars. Jamie: “One member from Thailand brought 130 stuffed toys with him for the kids because he owns a toy factory in Thailand. You should have seen the smiles on the kids’ faces.”

The empathy and enthusiasm in Jamie’s voice is contagious. Her step daughter is her source of inspiration, she says: “My step daughter is a teacher back home in Australia and came to visit in October 2016. She knew I was involved with Shine so she organised a fundraiser and brought over 900 AUS dollars. That made me want to do something more regularly. In May 2017 a good friend came over and started volunteering at Shine, which motivated me to do that as well. And well, I never left.”

The Hash House Harriers still donate to Shine every month. Jamie recently started teaching girls at Shine how to sew after a sewing machine was donated by a ShvH3 Member. 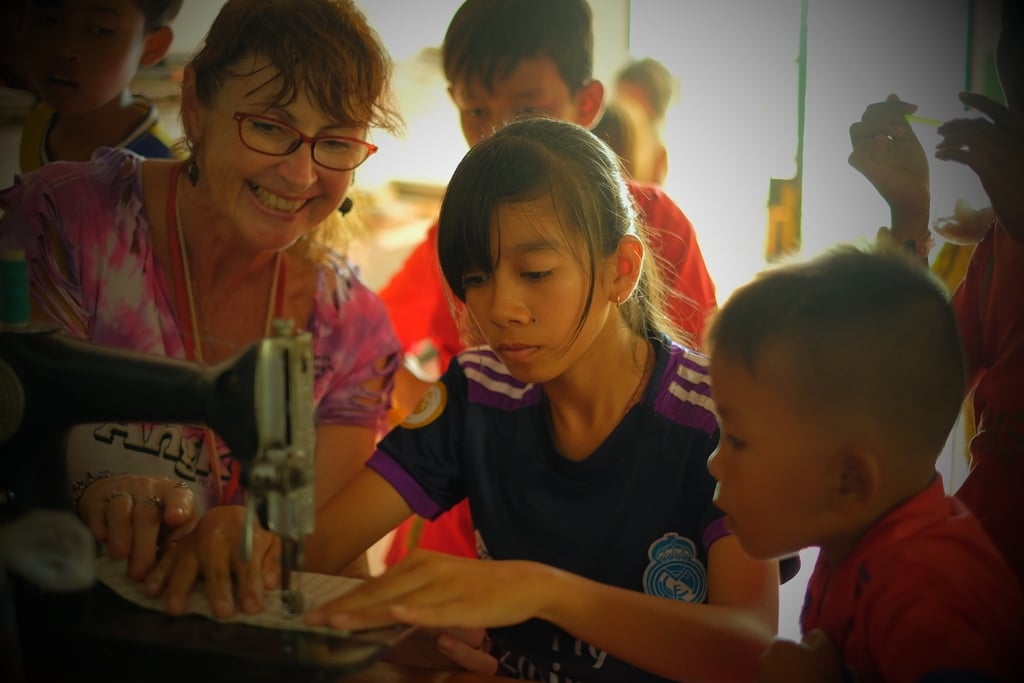 Want to know more about ShvH3? Find them on Facebook: https://www.facebook.com/groups/sinvilleh3/